Frank Rose is the second author whose work I discovered during the summer of 2012. His book, The Art of Immersion, explores how our current digital age of story telling has transformed audiences from passive receivers to active participants. While reading his book, I couldn’t help but think of McLuhan and his work.

I am a fan of Scott Berkun. He is an author who writes about “creativity, leadership, philosophy and speaking.” Check out his blog on his website where you can learn more about the books he has written plus a lot more.

I first encountered Berkun’s work a couple of summers ago. I was looking for some books that explored how individual people and societies are being affected by the Internet, WWW, portable digital devices and social networks. With respect to the digital tools, I was curious about where we are, how we got here and where we are headed. To put it another way, I was wondering who was picking up from where McLuhan left off. I discovered four new books on my search.

The above video is of Berkun speaking at Ignite Seattle, 7 December 2010. He provides commentary as the audience watches a time-lapse video of Berkun’s computer screen while he writes 1000 words. The video is in his blog post titled How to Write 1000 Words.

In the news recently, I saw a map of Earth that was used to illustrate some point in the article. And on that map, the continent of Antarctica was nowhere to be found. Having recently rewatched Werner Herzog’s Oscar nominated, 2007 documentary Encounters at the End of the World, I was annoyed that Antarctica had seemingly, well, fallen off the face of the Earth.

There are different types of world maps. Most of them distort the shapes of the land masses as well as the relationships between the continents, countries and bodies of water. It’s all misrepresented.

However, there is one map that does represent Earth without any obvious distortion. And that map is the Dymaxion Map, also known as the Fuller Projection Map. And that is Fuller as in Buckminster Fuller whom I mentioned in my post Call Me Trim Tab a few days ago. It’s a fantastic map and one of my favorite inventions by Fuller.

One more thing; Fuller made up the word “dymaxion”. If you haven’t heard of it before, can you guess what it means? Hint: It’s a portmanteau.

I made this photograph when I was flying to LaGuardia Airport. The plane was flying right above the Upper West Side of Manhattan. I was seated next to a starboard window and had a good view of the city below. We were flying the full length of the island, from The Battery to The Bronx. Seeing the city from that height fills me with childlike delight and wonder, as it always does when I get that opportunity. Each time I get the chance, I try to absorb all the details. The movement. The point of view. The ground illumination by streetlights, traffic lights, vehicle headlights and brake lights. City of lights. The evening light providing just enough illumination to see the buildings contained by avenues and roads and streets and lanes. It goes by so fast.

After having a final meal at Popover Cafe before it closes this Sunday Jan.  5, 2014, I had a craving for some other comfort food at Barney Greengrass which is right next door to Popover’s. It was a mid-afternoon lunch for two and it was delicious. 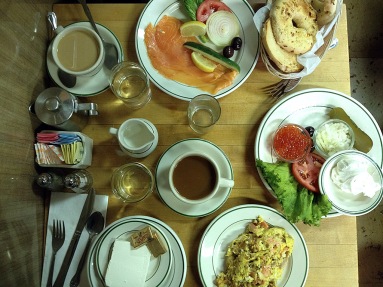 Detail of a fork and spoon on an emtpy plate on one of the wooden tables at Barney Greengrass. (Photo ©2014 David Altman)

The scene of another successful meal at Barney Greengrass. (Photo ©2014 David Altman)

Times Square was still teeming with tourists in the early evening of New Year’s Day 2014.  Aside from shopping, most people were meandering along the sidewalks and the swath of Broadway that is  now a pedestrian mall.  Cameras, mobile phones and tablet computers (mostly iPad’s) could be seen popping up capturing photos and videos of friends and families.  Tourists going solo were making selfies with the variety of landmarks that make up the canyon of Times Square as their backdrops.  And all the while, traffic was making its way south along Seventh Avenue.